Stop by Mrs. 4444's and see that there are other people like me that only have fragmented thoughts on Fridays....

*I forgot to mention how patriotic Texas is!!! One (70's soft rock) radio station (the only station that wasn't country), played the National Anthem every day at 12. There were so many Texas flags flying that it made us wonder what the Mass. flag looked like because we don't see it over every other house in MA like they have them flying in TX!

*A friend of mine's fiance has a tattoo that says Pitt on his leg. I was thinking it was for Pittsburgh something or other, but B had other ideas. "I think it might be for Brad Pitt. Maybe he has a 'bro-mance'." I love how that kid thinks!

*My parents are officially on "vacation" tomorrow because they are moving out of their house in order to rent it to vacationers and make some extra money. They are staying at their friend's house (and sometimes my house). We are worried that my Dad will not know what to do with himself if he doesn't have his house to "putter" around. Any ideas for fun things for him to do? Crazy question since we live on Cape Cod and there is plenty to do, but let's see what you come up with.

*I have to write funny things this week because my friend Laurie had her tonsils out today. She is looking for entertainment for the next week or so. If you have any ideas on what I should write, now would be a good time to suggest them.

*Took this pic of my niece on the 4th of July. Love these legs! 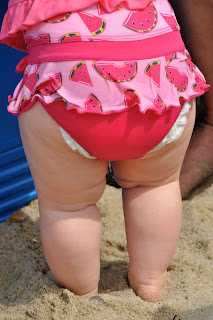 *B took this video while we were in Texas while going down a water slide. Maybe only Laurie will look at it, (and laugh in her post anesthesia state) but it cracks me up. We have a flip video with a waterproof case. AWESOME!

Happy Weekend!
Brought to you by As Cape Cod Turns at 9:45 PM

LOVED the video, even if it made me a little dizzy!! I have a Flip but no cool cover :(

You could have your dad write a guest post about what a rotten/wonderful kid you were...

Sue, I miss you. Just sayin'. I'm glad you blog often enough to keep in touch :)

Thanks for linking up.

I think your dad should take up gourmet cooking and take care of all meals while they're staying with you and their friends.

Thank heavens your kids have such a cool aunt to give them such a kick-butt water-proof camera case for a Christmas present! YAY ME!

And the thigh picture? Delicious!

"it's quite a thriller!" Hysterical!