Once It Was Called Scrabble

My grandmother taught me how to play Scrabble. We would play on the beach, at home, pretty much anywhere we could. She was ruthless and would whip my ass repeatedly. She liked to win.

I taught the girls to play as soon as they could spell and we have a beautiful pink board.

Since they got iphones for Christmas, they have been hooked on Words With Friends. I have an older  non-touch screen blackberry that does not support this game (or really any games). However, I realized that I could play it on Facebook. It is fun, it makes me think and I can be playing 10 different people/games at once!

I have also been learning new words: 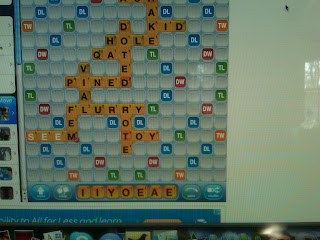 QAT: an African shrub that can make you high.
ZED: a slang term used for zombie

or sometimes I throw in a french word and it means something random in English like
VERT: green in french, some sort of forest vegetation in english.

The game is fun and I have my grandmother looking over me, putting high scoring words in my head. However, I still don't understand how this person got kicked off a plane because he was so into a game.
Brought to you by As Cape Cod Turns at 9:54 AM

And I've learned "UTE" - some native american tribe - and "QI" or chi. Oooh...its a LEARNING game!

I like the game too, but Jim gets mad at me because I don't play a word the second he plays his. :) He doesn't get that I don't just sit there waiting for the game to move forward!