Welcome to the last Friday of the school year. 3 1/2 days and counting!!! Yes, Midwesterners, we are still in school..... Go check out Mrs. 4444's for random thoughts from lots of good people.

*Bear news: The bear was taken off the Cape earlier this week and relocated to Central Mass. I hope he finds lots of girl bears there. The reason they wound up taking him off Cape was not because he was causing any trouble, but too many people were trying to get a glimpse of him! Celebrity Stalkers!

*This is a YOLO (you only live once) face, if you wanted to know. This is what happens after you do a project for school of how to make and eat crepes and you've had just a little too much sugar and there is a swim bag laying around..... 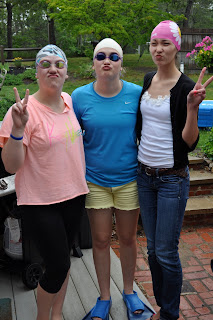 *Just want you to know how classy I am. I needed another table for P's party last weekend, so I used 2 saw horses and an old shower door. Maybe I should just call myself creative? And yes, I put a lovely table cloth on it, voila! 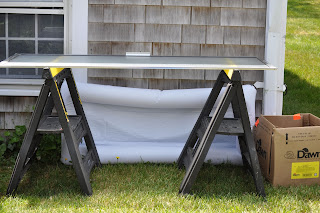 *I was watching the news this morning and listening to how many millions of dollars Obama and Romney made in fundraising dinners just last night. Is it just me, or do you think it is a little silly to raise all this money for a campaign where the money could go to much better use in so many other places?

*Chatham celebrated it's official 300th Birthday on Monday (there are 300 days of things to do, so you haven't technically missed all of them). There was a lovely ceremony at the band stand and later in the afternoon they opened a time capsule that had been "buried" 50 years ago at the 250th celebration. It was funny how unexciting the stuff in it was. There were a lot of names of people in different groups around town, a plate celebrating the 250th birthday, a recording of a meeting, and a picture of a bunch of men in beards. In my eyes, the best things were a 4 cent stamp and a map of Chatham from 1962.

A new time capsule was filled with much more exciting stuff like photographs, menus from restaurants, church bulletins, information about fishing, books, an iphone and a guest book that everyone at the event signed. In 50 years, I can go to the next celebration and say, "I was there!", see there is my name. 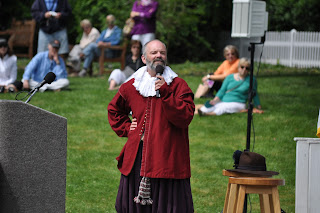 This man did a re-creation speaking as if he were the first Chatham settler, William Nickerson. Fantastic!

*In exciting family news..... the high school had a night of excellence the other day( um, night). We knew ahead of time that K and P were getting an award. It was very exciting and a proud moment for me, but the real kicker was when K got the Blue and White award. Basically, the teachers picked a good for the school, good grades, all around good kid in each grade to win this award and they picked K!!!! She received a paper signed by our state representative and a gift card to Amazon! The look on her face was priceless! Total surprise and my faced mirrored hers! 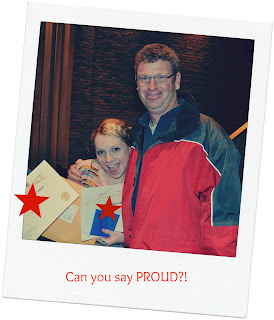 *Phew! That was a lot to get off my mind! Hope you have a great weekend!
Brought to you by As Cape Cod Turns at 9:48 AM

Lot of good stuff going on, indeed! Congrats to K, P and B for being so awesome (like their mama bear) enjoy the weekend (it's supposed to be gaw-juss) my friends!

A fascinating read this week. Lots of fun news indeed.

I am happy for the bear. I love your silly photo and your great table. Have a great summer.

So much great stuff in this post I am not sure where to begin. Love the pic. The shower door idea is genius! It is big and you can leave it outside and if it rains, who cares. I love when towns celebrate their anniversaries. Na a HUGE congrats to your talented kids...and to you considering you must be an awesome Mom for them to get that way.:) I so miss the bear...sigh.

They should bring the bear to Chicago. :)

Looks like you had a great and busy week.

And I LOVE the door/sawhorses idea! So creative!!

Hey, one man's saw horse is another man's table leg!

Your community sure sounds nice :)

Have a wonderful weekend. Thanks for linking up!

I completely agree with the amount of money wasted on campaigns... the scary part, we have 5 months to go!
Happy weekend!

Do your girls have any idea how lucky they are to
live where they live and to have such a neat Mommy?
Thanks for sharing.
Love you.