This morning was rushed. As in, rushed more than usual.

Last night B finished her (epic) project for history. She had to build a coliseum so that it would cover the top of a desk and be fairly accurate to history. 34 ten inch tubes hot glued onto Styrofoam and a cardboard roof with a Styrofoam peak. She glued some sand onto the ground to make it look more accurate (I don't think that they had artificial turf back then). The final project turned out pretty cool, even though there were times while she was building it that I had my doubts. 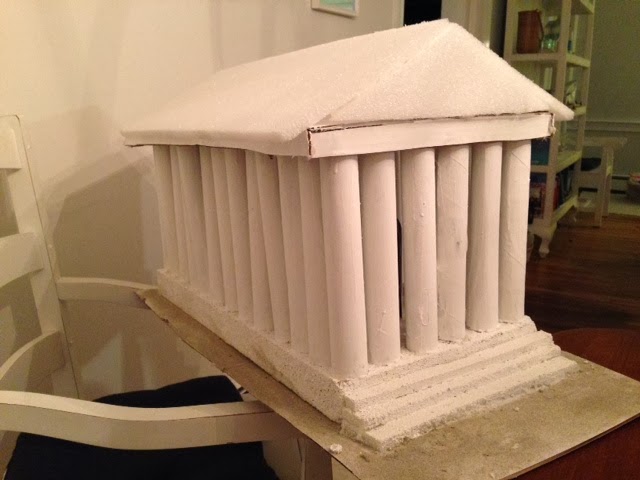 So, she finishes around 11:30 last night and crawls into bed only to wake up at 5:30 this morning for morning swim practice. She wakes me up with 5 minutes to spare because I have slept through my alarm. Carefully put epic structure in way back of minivan and secure it. She throws in all her bags in middle row. Drive 25 minutes, drop her off, turn around and go home to shower because I slept through my alarm(duh).


Get back in car. Know that I am picking up girls from swimming to get them to school. Start to clear the middle row of stuff from the inside of the car because it is freezing outside and huck (yes, that is an accurate description) a half-full water bottle to the back of the van.

My brain caught up with this action as the water bottle was spinning toward the back of the van. It was like it happened in slow motion.

Me (in regular time), "OhshitOhnoOhshitOhno".

Bobby, being the voice of reason, "OhShit".

We jumped out of the car and slunk to the back and opened the trunk to survey the damage. We sort of resembled people watching a scary movie with our hands over our eyes, but with our fingers spread apart.

Direct hit, but just dented the Styrofoam roof peak. Nothing as disastrous as I was imagining, but still knew that B was going to be annoyed (OK, highly annoyed).

We went up to swimming, picked up B and 2 girls. Gave them their donuts and hot chocolate before we told the story. I think that cushioned the blow a little bit, but she was upset a tad bit when we got to school. She carried it into school as I emailed her teacher.

B texted me later that she was sorry she was so mad about the dent in the roof and that her teacher thought the whole things was hysterical.

Phew. Another parenting total fail avoided!!
Brought to you by As Cape Cod Turns at 8:51 PM

Email ThisBlogThis!Share to TwitterShare to FacebookShare to Pinterest
Labels: B, parenting, projects