That's a lot of time for 2 people to be married to each other.

A lot of things have changed too, and I don't just mean the color of their hair.

Lyndon B. Johnson was President and the St. Louis Cardinals won the World Series.

Movie tickets were $1.25 and you could see the likes of Goldfinger, Mary Poppins or My Fair Lady.

The Beatles appeared on the Ed Sullivan Show and Barbra Streisand won Album of the Year.

Thank goodness she didn't let up because this unlikely pair have been each other's rocks for 47 years. Through good times and trying times, they have stuck like glue. And thank God for that because they wound up with 3 great kids and 3 fantastic granddaughters (so far). 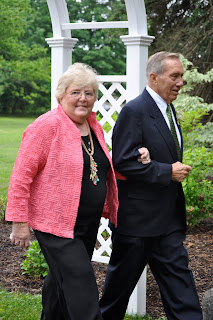 Email ThisBlogThis!Share to TwitterShare to FacebookShare to Pinterest
Labels: anniversary, mom and dad

Whee! Happy anniversary to Mom and Dad of Sue!!!

And may they have many, many more.

What a GREAT picture -- Happy Anniversary!!!