When my girls were younger, I kept a journal of the hysterical things they would say. It was all about learning this crazy language called English and sometimes some of the words had to be tested before the correct meaning was learned. For example, I was turning a corner and said, "Ugh, I didn't get a clean look". The girls asked if I had gotten a "dirty look"? Then there was the time, B called communion at church snack Sunday. As they got older, there were less and less funny words that flew out of their mouths. Now, I don't even want to write down what they say most of the time. Yikes!

Do you remember when Jessica Simpson and Nick Lachey had their show together? Jessica had some classic comments that gave truth to "dumb blond". My favorite is this, "Is this chicken, what I have, or is this fish? I know it's tuna, but it says 'Chicken of the Sea'."

Well, I thought I was done with funny word play, until this afternoon. One of my children suggested I use wheat eggs in foods when I was baking.
"Wheat eggs? What are wheat eggs?"
"They are brown eggs."
"Wherever did you get that idea?"
"Well, you said that brown eggs were better for you than white eggs, so I thought it was like the whole white bread, brown bread thing."
"That would go with the jingle, 'brown eggs are local eggs and local eggs are fresh', not brown eggs are WHEAT eggs." 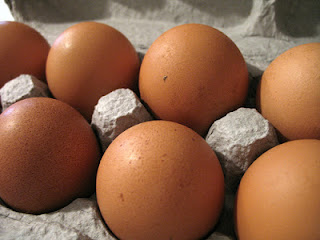 Note to self, don't send her to culinary school and keep my ears open for more word opportunities. Doesn't sound like the priceless gems will end any time soon.

Email ThisBlogThis!Share to TwitterShare to FacebookShare to Pinterest
Labels: girls are silly

My favorite "Mommy? You're a friggin Hick"

Wheat eggs! So funny. I love when my kids create their own terms.