I awoke this morning to B telling me that her breath smelled like, "week old wet dog". Doesn't that paint a pretty picture? Makes you want to jump right out of bed and start the day! I came downstairs after my shower (hey I fit one in today!) and immediately went to the computer. B is watching tv, it's 8:15am and she says, "can I have a reeses peanut butter cup? I have been craving them this morning." So I said, "OK, fine" (whatever, it is Saturday and I want to check in on my blog friends) and she adds, "I may have had a herseys kiss to freshen my breath first". Whatever happened to a bowl of Wheaties to make you strong and get you through the day?

DH is out fishing, so the girls and I tackle painting their rooms in our house that we are moving into while renting out other, larger house. I let them pick the colors of their rooms with a little assistance, like keeping it to 2 colors. Here is K and one of her colors 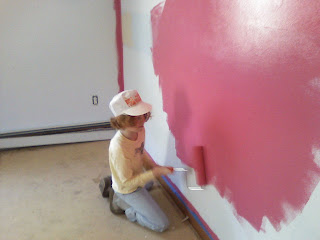 Yes, that would be a deep shade of pink, it's called razzle dazzle. Her other shade is Kittery Point Green. I would show you a picture of B's light blue and seafoam green room, but I am not proficient at my camera phone yet and have appeared to have not saved the pictures I took. Whoops. Nice painting caps from Home Depot, K had to have them. I tell you, it's all about the fashion. I was truly impressed with how the girls did painting and not whining about painting! After I explained to them that I had originally (years ago) single handidly taken down the wallpaper and painted the walls more normal colors without the help of their father, they were duly impressed. B even said I was "a competent man". That's all I've every hoped for as a woman, to be a competent man. I think it was more of a compliment than it sounded. Hopefully, they are up for another colorful day of fun tomorrow!
Brought to you by As Cape Cod Turns at 9:32 PM

I love that color - nice choice!

Looking forward to some more pictures!

Thanks for visiting my blog AND leaving a comment. You ROCK!

I know it's hard to get a following for your blog, but now I'm one.

I know one blogger who sold some things on eBay, and accompanied the items with a funny story. That's how she got a HUGE readership.

The catch is, I guess, that you have to post a lot and keep it up.