The last day we squeezed in everything we hadn't done or wanted to do a few more times! We began at Turkey Creek Park. It is kind of like the jungle with a wooden walkway through it. I was waiting for a snake to drop out of a tree on my head the whole time, but (thankfully) no luck! The cool thing is the amount of turtles in there. At one spot there were about 40 underwater! 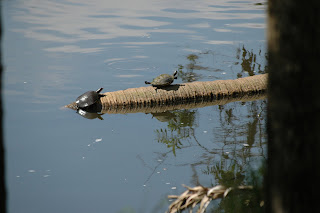 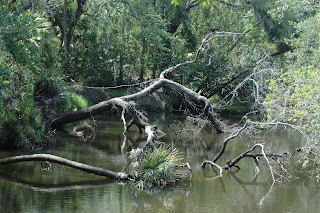 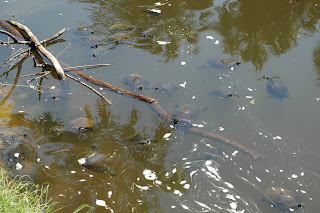 We hit the beach again, but were hesitant of the water this time because as we were leaving the last time, we saw a portugese man-o-war. Otherwise known as very poisonous jelly fish. YIKES! The pool was much safer and lots of fun. B blew up her bathing suit to help her float around. 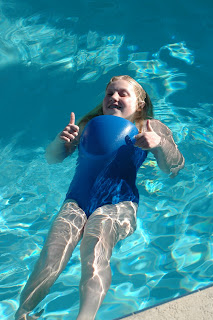 K stuck to her favorite floaty. 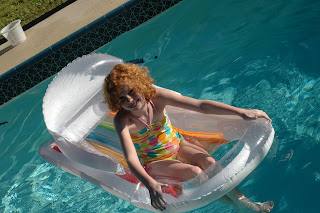 After dinner, we went to pet the manatees, but no luck. We saw the snout of one a ways away, but he was shy of the crowd on the dock, I guess. 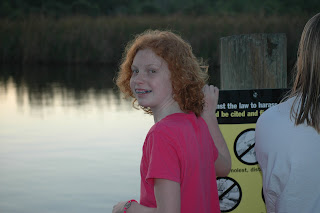 So we had to settle with a picture of one. 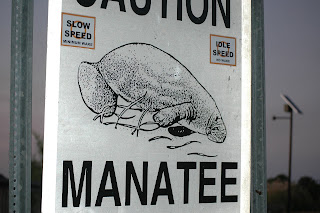 That wraps up Florida. We have actually been home since Thursday, but the 80 degree temp here over the weekend made for some serious procrastinating!
Brought to you by As Cape Cod Turns at 7:00 AM

Email ThisBlogThis!Share to TwitterShare to FacebookShare to Pinterest
Labels: April vacation, back to reality

B sure has filled out over vacation! I hope you all had a great time.

You forgot to mention that the pool water was MUCH cleaner and prettier! :)

Thanks for the photos, especially the turtles. I hope all of you had a wonderful time. It sure looks like it. And I hear Cape Cod is a nice place to vacation, too. I hope to get there one day.

Did you stuff some Floriday sunshine in your suitcases? Maybe we have you to thank for the warm temps up here in the Northeast!

I'm thinking all this holidaying is bad for me. I mean to watch. Isn't there room for me THERE????