This past Sunday, I treated myself to a fantastic day at Stonewall Kitchen in York, Maine. Blog Better Boston put this event together and sold tickets to a small amount of bloggers. They specialized on foodie bloggers, but I was not about to miss a trip to Stonewall Kitchen for a backstage tour. I have been to this store many, many times, but never to one of their cooking events or tours.

Is this not inviting?! 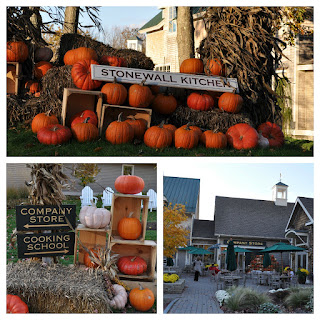 We started the morning off with croissants from AuBonPain. (YUM) and then headed into the storage room. Oh, to see all that sugar in there made me want to bake something! We got to put on hair nets which looked so lovely. Cyn our tour guide and style director made the hair nets look good while she explained to us the jam making process. 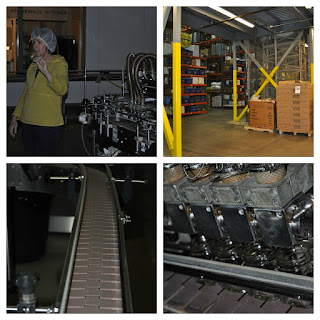 There were little displays all over the offices of Stonewall's products.

My favorite room was the design studio. This room was covered with props, had big windows, white walls and a kitchen in it. It is where most of the pictures for their catalog and website come from. I could have spent the day in this room. However, the smells wafting in, reminded us that it was time for lunch!

Patty Roche went through each recipe of our 3 course meal and showed us how to cook and serve. Acorn Squash soup with Ginger, Prosciutto Wrapped Chicken with Ricotta and Sage,  Roasted Pumpkin and Vegetable Medley with Creamy Polenta and Pear and Fig Cobbler. To say it was delicious would be an understatement. They have an amazing cooking school at Stonewall with a catalog of events that will totally surprise you. I cannot wait to sign my mom and I up for one!! 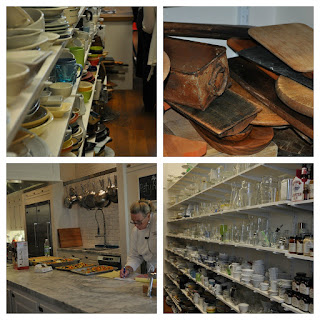 The other bonus about a blogging event is meeting some fantastic bloggers from (in this case) around the Boston area. Check out Maeghan's post for a great picture of our swag bag (and other great pictures). After we all went home, we realized that Maeghan and my sister were friends! Crazy small world.

Wait, why didn't I take a picture of my own of the swag bag? Because the minute I get home from an event, the bag is dumped out on the floor and dispersed immediately amongst the 3 of us. And after a 7am to 8:30 pm day on the go, I was just too tired to wrestle the AuBonPain snacks out of the girls hands and set it up all pretty.

And Wayfair, once I figure out how to use my immersion blender (which I am giddy about), I will write up a proper post!
Brought to you by As Cape Cod Turns at 6:36 AM 2 comments:

This is where I am at with Lance Armstrong.  I am so sad that he had been doping all the years during his Tour days. I want to believe that he did not dope or do performance enhancing drugs or was the ring leader in his team's drug dealing. I also want to believe that Santa is real and can come down my chimney with everything I want for Christmas. "People" like this will forever be in a corner of my heart where I wish things were true, but are not.

A girl can hope, right?

Why, you might ask, is Lance even on my radar or the least bit important to me? He was there when my family needed him most. The day my brother found out he had cancer, my sister and I jumped in the car and drove 2 hours to be with him. We made a stop on the way to Barnes and Noble to buy It's Not About the Bike by Lance Armstrong. We had always been watchers of the Tour de France and truly enjoyed Lance's energy. This book was our guide to what cancer was like and how we were going to help our brother fight it.

After my brother kicked cancer in the ass, he rode in Lance's Ride for the Roses in Austin, Texas. My sister and some of his friends went to support him. They had so much fun that my sister, mom, dad and I went the next year when he rode. We went to a big Livestrong trade show, a talk about cancer, enjoyed Austin to it's fullest and cheered on the thousands of riders along the 100 mile route. There was so much yellow there. As the riders came through the finish line, there was a section for survivors. Each survivor was given a yellow rose. Karen gave it to him the first year, my mom gave it to him the 2nd year. I cannot even describe the grace in the air there that day. It was magical.

We all continued to cheer Lance on through the alps at every stage of the Tour. He said once when asked about enhancement drugs that he had survived cancer, why would he do horrible things to his body with doping, etc. This is not, of course, word for word, but something I remember him saying at some point in his career. And I believed him.

The Livestrong rides got so big, that they broke them down into areas of the country. My brother decided that it might be better to ride local, so he has ridden in the Pan Mass Challenge for 6 years or so. The constant in all this is his bike. He rides and raises money, so other people have the chance to ride or walk or run or just plain live.

Lance gave us a gift. The gift is the Livestrong foundation and the will to survive cancer. Is he a bad man for doping? No. He made a bad decision to dope. He lied, which is one of my really big pet peeves. However, did he bring a name to American cycling? Yes. Has he brought hope to so many people with cancer? Yes.

I will continue to keep him in that little piece of my heart with Santa, the Tooth Fairy and the Easter Bunny: things I wish were real that I really cannot let go of. 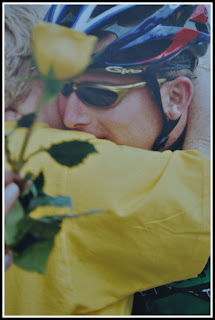 Yeah, I say that about a few hundred times a week.

I got hit on at the grocery store by a 90 year old man I have known for the past 15 years. And I don't mean, "hey baby how are you doing", I mean let me tell you what kind of lover I am and that I really could use some. Ew.

I get home from a Thirty-one party the other night and a strange truck and guy are in my driveway. How long has this truck been there, girls?
About an hour or more.
Hello, 911?

K is running around this morning getting ready for school and happens to mention that the toilet has overflowed all. over. the. bathroom.

A special event man at school tried to get the Kindergartners to read the word xantophyl. Yeah, like maybe some of them know the letter x.

We had an earthquake tonight in New England. 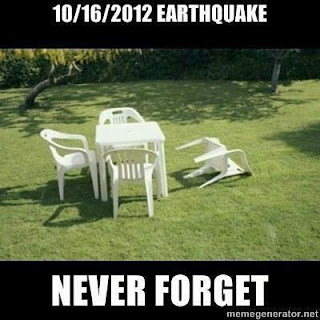 Why do I have a hard time getting up when the alarm goes off at 5:45, but have no problem thinking a million thoughts at 4:00am?

I solve most of the world's problems at 4am with my eyes shut willing myself to go back to sleep.

Early this morning, I cured cancer, solved financial issues, gave good advice to my girls and cleaned my house all with my eyes shut in my bed. Yes, I am that amazing.

I even wrote a blog post or two, but now I cannot remember them. That is the unfortunate thing about 4am; I can't be bothered with writing anything down.

I can, however, give you an example of me trying to go back to sleep.....

I think I need a nanny cam for my brain so I can remember all these awesome ideas I create. Either that or a required nap time.
Brought to you by As Cape Cod Turns at 8:15 AM 4 comments: