My gift to you for Christmas:

Silent Night (Yes, B is one of the singers:)


Hope you all have a wonderful day!
Brought to you by As Cape Cod Turns at 4:35 PM 3 comments:

Email ThisBlogThis!Share to TwitterShare to FacebookShare to Pinterest
Labels: B, Christmas is fun, church

B and the Middle/High School choir have gone to the largest inn in town to sing today. I believe they were even getting lunch. Chatham Bars Inn is lovely all year, but they truly out do themselves at Christmastime. Their lobby boasts 10 foot high trees made from Poinsettias, they make a huge gingerbread display, there are ribbons and bows everywhere.....

Here are a few pictures from 4 years ago.... 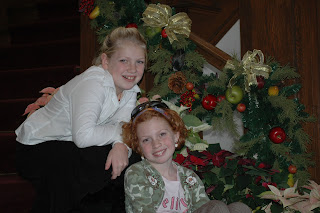 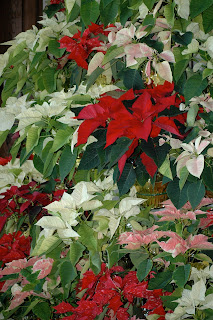 What I am trying to say is that the place is GORGEOUS! So what does B text me a picture of today? 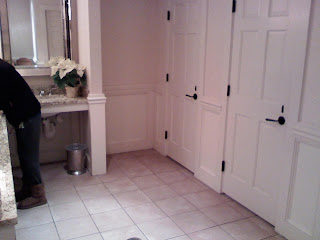 The bathroom. That's right. With this caption "coolest. bathroom. ever."

Obviously, I have raised one with very high standards.
Brought to you by As Cape Cod Turns at 12:47 PM 5 comments:

Email ThisBlogThis!Share to TwitterShare to FacebookShare to Pinterest
Labels: B, nothing but class here

It's been a busy month.

Yeah, that was an understatement..... anyhoo, what else is December, but busy?

Evidently I haven't been writing enough. 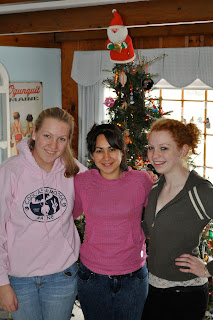 I miraculously gave birth to an 18 year old AFS student from Chile!

P has been in town since Sept and is a friend of K's. Her first home was not working out for her, so now she is living with us for the next 6 months! We are very excited to have another girl to add to the Diva Den. Of course, with her arriving into our family the week before Christmas, she has been thrown into complete mayhem! She's met about 20 relatives, about 20 more friends and a whole church! She has been to one party and is going to another tonight! She is very sweet and has been such a good sport about us bringing her here and there.

I have to commend K and B for supporting the decision to "adopt" P into our family. We don't have the biggest house and can often be in each other's faces, so we really have to like each other. I am hoping that the next 6 months will be a positive learning experience for us all!
Brought to you by As Cape Cod Turns at 4:32 PM 8 comments:

Email ThisBlogThis!Share to TwitterShare to FacebookShare to Pinterest
Labels: AFS, B, K, P

This past weekend B attended the South East Regional singing competition. It was called something along those lines. She and 3 other middle schoolers had been working since October on singing a specific piece. They worked hard and were excited about this opportunity.

Now mind you, my girls ask me NOT to sing. I am a closet singer and love to sing when no one is listening or in the case of having one too many, at a karaoke bar. I sang when I was little in my church choir. I only remember them labeling me an Alto and in my naivety thought that meant I sang like a boy. This on top of people thinking I was a boy until I was 14. (At 14, there was no mistaking that I was all girl.)

My high school was very much like the beginning of High School Musical, where all groups were segregated. It was a big enough school so the drama dept didn't need the jocks and vice versa. I was a jock and stayed a jock until college when I got to be a jock and part of the dance community. I digress....

So, being the type of mom I am, I planned on going to support B in her quest for music greatness. I offered to drive the troops, but 2 schools rented a bus instead. Supporters were allowed to go on the bus, too. On the bus were 11 singers (way back of the bus), 2 music teachers (front seats) and ME.

I enjoyed not having to drive the hour away and was able to knit and eavesdrop on the girls and the teachers. The other school's teacher was talking about how she wished one of her girls would make it to the next level and B's music teacher said, "I think all the girls are successes just for having the motivation to commit to this program and practice as hard as they did." It was truly something I hoped he would say to the girls because it was so sweet.

We get to the HS and there were musicians everywhere: some with instruments, some with their voices. Some were very stereotypical, some were not. I was thrown out of the practice room and told to go to the cafeteria. In my head, I was thinking that I would miss the performance if I didn't keep track of B and where she was going so I waited in the hallway and told a dozen people where the bathrooms were. Finally they came out of the practice room and I followed her to what I thought was the auditorium, when I noticed the teachers were no where to be found. As I was thrown jackets, I was told again to go to the caf. and wait.

Instead of a championship game where the fans are an integral part of the package, these kids had to sing one on one with a judge in a room ALONE. What?

I didn't get to watch. Or listen. Or clap.

When the kids came to the caf. after their audition, they said how they did and that was it. We got back on the bus, hit Burger King and drove home with the girls singing Christmas Carols or anything else that came to mind. They had to wait until Monday to find out if they made it to the next level.

None of B's "team" made it. B didn't realize until 2 weeks before that she had to show that she knew how to read music. She doesn't know how to read music. Give her a note and she will sing it, but have her figure it out herself? Nope. Overall, the day was an experience in the unknown. I just hope the girls know how incredibly brave they were to sing one on one with no fans giving them the thumbs up or the thunderous applause that they deserved.
Brought to you by As Cape Cod Turns at 8:48 AM 5 comments:

I love this smiling face, 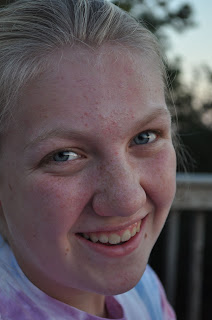 I love that you are so strong and yet, still keep your toes pink. 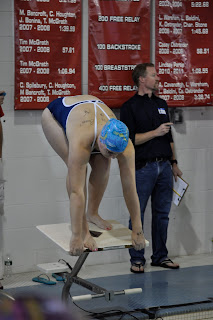 I love that you love to swim (and the improvement in a year on the team? UNBELIEVABLY AWESOME!) 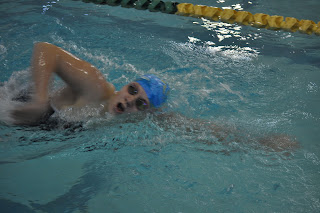 I love that the movie you made about erosion 2 years ago, somehow has 1500 hits on Youtube.

Don't forget all that now that you are a TEENAGER! 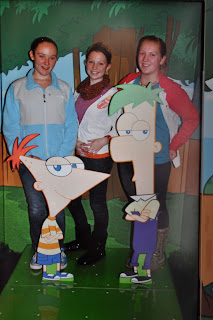