There has been a lot of talk lately on whether children under the age of 13 should be on Facebook. Also, should children have their own emails, computer, etc.. There is no right answer, but I will give you what has worked for us so far. (With technology, something that works today, may be old school tomorrow, just sayin'.)

Cellphones:
K got a cell phone in 5th grade. It was basic and the real reason that I got it for her was for her to be able to call me when she was done at the barn. She fondly remembers it as her "hippo", it sort of looked like one. What works for one, works for the other. B got her phone in 5th grade, but really did not use it too much.

Honestly, I don't know what we did before cellphones. P has not had a cell phone while she has lived with us and at times it is tricky. I have had to rely on K knowing some of P's friends to find out where and when she needed to be picked up. K and B both now have iPhones. They have locks on their phones which I do not know. Does this worry me? Yes. Do I wish I had made the rule of give me the lock number or no phone? Yes. If I had their code, would I spy on them by reading their texts? If their moods changed and something seemed off with them and they weren't talking about it, then yes. Is this like our parents reading our diaries when we were young, probably. Some might find this horribly wrong, I see it as safety first.

And the house rule is no cellphones at the dinner table.

Facebook: Both girls got Facebook accounts in 6th grade. The rule there was I had to know their password and be friends with them. This still is a rule today. I do not ask their friends to be friends with me, but if their friends ask, then I usually accept. I try to stay off of commenting all over their pages because that is "so uncool", but monitoring works for me.

Twitter: We all have twitter accounts. I had mine years before they got theirs. Twitter seems to be the big thing for high schoolers these days. Say what you have to in 140 characters. Soon kids will be talking out loud in code. One of my daughters' (freshman) friends said, "Ugh, your mom is following me on twitter. She is going to see me drunk tweeting." Heads up kids, whether we are friends or not, I can look you up and see your drunk tweets. Twitter is not very private.

Instagram: They have instagram accounts, I do not because they have iphones and I haven't been upgraded to one yet. One of these days I will get an iphone and when I do, I will be on Instagram too.

Tumblr: K has one, B thinks it's confusing. I do not have one. The only way I can see what K does on Tumblr is if she leaves it open on my laptop.

I am lucky that my girls are not into gaming sites. They never had Nintendo or DSs or hand held type gaming systems. We have never had a TV in the car, but sometimes on long trips I wish we had. However, we got by playing the license plate game or I Spy. I also had made them magnet boards to use in the car. Anyway, did this make them not like games? Or is it the fact that they are girls?  All I know is that killing zombies is of no interest to them.

Our computer has always been in the family room. My laptop is always around the couch. Things got tricky when the girls had ipods and could get internet on them. They were often in their rooms so I did not know what sites they were on. We definitely have an open stream of conversation and they know that they can come to me with anything.

Both girls are going to sleepover camps this summer. They are not allowed to bring their cellphones or computers. This thrills me to no end and paralyzes them. I am thrilled because they will be focused on camp activities, being outdoors, learning, laughing and meeting new friends. They will not be able to worry about who is dating whom, what so and so is wearing, what anyone did last night unless their friends write them a letter and mail it in a mailbox. Now THAT would be something!

Sometimes, the immediacy of everything is a little overwhelming. However, sticking our heads in the sand as adults is not the right thing to do. The internet, cell phones, etc are not going to go away. The best way to combat this is knowledge. Get on Facebook, talk to your children about what is OK and not OK to write, and try to stay one step ahead of them.

Also, it is good to torture them with a nature walk once in awhile. 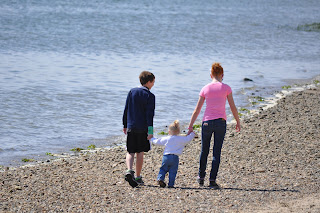 Absolutely LOVED this post! You sound like you got it exactly right when it comes to technology/social media and the kids. :)

This post is partly why I don't have kids. It scares me to death. What if I couldn't keep them safe? What if's are way too common a thought for me. (Even for my kittehs,~ which are my children.)Whatever things can make life work for everyone. I know I can't handle the thought of having kids and not being able to control the situations. Scares me to death.

My 13 year-old son insists that, living with 3 sisters, he doesn't need the extra drama.

My almost 11 year-old is the youngest of my girls, enough said.

I really appreciated this post. I love that you started off by saying that there is no right answer. You sound like a very level-headed parent. I hope I soak up some of your wisdom.

This is a really good post and very informative, especially I'm sure to the parents who are trying to figure out what they want to do and when as it relates to technology.

I do LOVE when kids (okay, and me too!) are forced to be without technology for a time. It's a good reminder of what's important and how to really focus on one thing at a time! I think kids today have been raised with the need to multitask, and I'm not sure that's a good thing...

Need to bookmark for future reference! Great tips!! Also found you on FB. I can't wait to read more from you. Feel free to come visit if you like!
Kelly @ Exceptionalistic.com