Welcome to Friday Fragments where you can unload and start your weekend on a fresh slate!

*Was at the barn this week with K and had to take pictures of Milly the goat. There was feed in this bin, so she jumped in with both feet and by the time I left was laying down in it. Talk about protecting your food.... 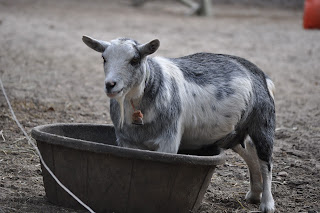 *B had her first swim meet this past Saturday. This is her favorite picture because it shows the writing on both her arms. I don't think she really needed it on BOTH arms, but I guess it made her more cool. The coaches suggest that the kids write down what heats they are in on their arms so they don't miss anything. She didn't miss anything and had a blast!
The best thing was that they didn't have an award ceremony at the end, so no sitting for an extra 2 hours while kids get awards. Phew. The bad thing about that is I have no idea what her times were, but she had fun, so I will call it a success! 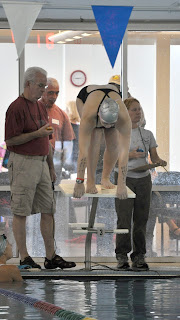 *K had to make a project about herself for Health class this week. She did this all by herself and was very proud of it. It is really cool, which is why I took a picture. I think if you click on it, it will get bigger. 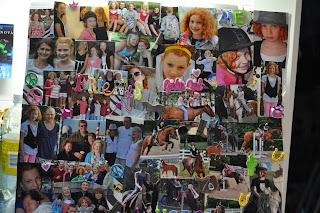 *Does anyone have or know anyone that has a Kia Sorrento or a Kia Sedona? I need a bigger car.

*There is major construction going on in front of my house. The town is putting in new sewers. Every morning this week at 7:05 the house shakes while 2 big ass digger type trucks rumble by. They are the biggest diggers I have ever seen in real life. Little dude loves watching them! I have to admit, it is kind of cool.

*Yesterday, I drove 140 miles just running around town and shuttling kids to things. By the time I sat down for dinner at 7:45, the girls asked why I seemed so stressed. I explained to them my day and K said, "I would be sitting on the couch with a glass of wine and some popcorn if I were you." Probably not a good thing when your 13 year old knows you better than you think.

*My nephew got his lisence yesterday! That means I have someone to run and get my M&Ms when I run out. Perfect!

*Unknown Mami has won the OshKosh Gift Card I was giving away!!!

*And for those of you that were baffled the other day.... jeggings are leggings that look like jeans, but they are so much softer and comfier than jeans!

What an awesome collage she made!!!

I'm sure your nephew wont mind.. I know when I got my license - ANY excuse to drive somewhere was all I needed!

That is a very cool collage. K did a great job.

B looks pretty darn cool on that board.

She did a great job on her collage!

I also love the collage! I drive a Sedona and have had great luck with it [knocks on wood until knuckles bleed!]

That is some terrific collage!
Very impressive.