We All Need a Feel Good Story

I joke about calling my town a hamlet. It is small. It is very small during the winter when there are no tourists milling about and not many stores open. The Cape is so small in the winter that things don't have to happen in your town to hear about them. At times it can be exhausting having everyone knowing your business, but at times like this past weekend, it was a Godsend.

A family in my hamlet, whom Matt has known since birth, I have known for 20 plus years and our children are friends, found out that their 12 year old son had brain cancer. This happened days before Thanksgiving and he was operated on days after. The entire family has been nothing but positive. The boy has been fighting a courageous battle and continues to today. He has had 2 surgeries, radiation, chemo all the while continuing his school work and learning everything there is to know about ipads and iphones.

This weekend, the Women of Fishing Families (WOFF), threw a fundraiser for the family. The mom is part of our group (WOFF) and it was surreal planning an event for her instead of with her. There are so many stories of giving, helping, planning and attending, but I wanted to tell you about one story in particular that will restore your faith in mankind. 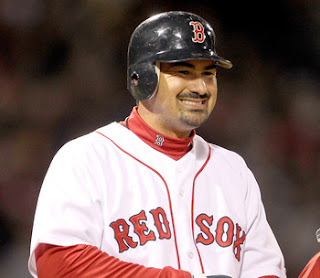 A woman was talking about the fundraiser with her neighbor from another town. The neighbor's boys had just gotten a signed Adrian Gonzalez Red Sox shirt at a fundraiser the previous weekend. The dad paid about $300 to win it in an auction. The boys heard about the fundraiser for the boy their age who was battling cancer in their neighboring town. They gave their new and treasured shirt to our fundraiser and said, "We want it, but he needs it". The shirt went on the live auction with some Red Sox tickets and a dinner. The package went for $1000 and the woman who bought it is sending the boys back their shirt. She got thinking during the bidding that there was no way she was not going to win this so she could send the shirt back to the boys.

It gives me chills to witness beautiful acts like this. I was watching the news this morning and everything was negative. I said to B, "I want a channel that just tells the weather, sports and entertainment news." I think I will add feel good stories like this one to my new channel. Anyone want to run with this idea?
Brought to you by As Cape Cod Turns at 12:07 PM

It was such a great sight to see all the support for BL. Then to hear the bidding go up to $1000 was awesome! I really had to stop myself from looking at houses for sale in Chatham because we want to live there and be part of a community that cares and gives back like yours!

That is an AWESOME story!!! So unbelievably cool (well, except for the cancer part, but you know what I mean)! ;)

This kind of stuff is exactly what I need to read. Thank you for sharing such an awesome story of hope! I will send good thoughts & prayers for your friend!

What a fantastic story, thanks for sharing it, my friend! Oh, and YES! I would totally subscribe to your feel good channel :)

That is all levels of win for everyone. I hope this friend's son continues to do well.