DO YOU KNOW WHAT TUESDAY MEANS?!? 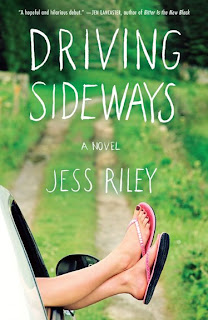 It is the first day that you can buy Jess Riley's first published book, Driving Sideways! It will be a wonder if you can even fight the crowds to get into the bookstores! This book will be flying off the shelves. If you don't dare to tackle the crowds, order it on Amazon. If you want to really be impressed and can possibly wait until June, go to Target. It will be the FEATURE book there, yes, at Target, my favorite store! If Jess' book is anything like her blog,
then it is sure to be a huge hit! She is very funny, very real and she lives all the way in Wisconsin! How many writers do you know that come from Wisconsin?!

Here is part of the first chapter:

I am alone no longer.

It’s strange how much you can change in just one year. Twelve months ago, I’d have laughed in your face if you told me I’d be packing for a road trip this morning. Not rudely, of course, but because traveling anywhere remote was a remote possibility for me at that point. I’d have sooner believed you if you’d said, “One year from now, you will become a Scientologist, learn the pan flute, and join a Bay City Rollers tribute band.”

But I’ve had a change of heart. Well, kidney, really. I’m leaving for Los Angeles this morning, about to do some things long overdue. My Saturn is idling in the driveway, stuffed with suitcases I’ve never taken anywhere but to hospitals. I feel as if I’ve just discovered that the cure for cancer is dark chocolate followed by two orgasms. I think I’ve forgotten to pack my toothbrush, but I don’t care. I can buy one on the way. The thought thrills me.

“So you’re really doing this,” my brother, James, says from behind me, sending me out of my skin.

I jump, making a hair ballish–noise like aak, and spin around to face him. He crosses his arms and fixes me with his practiced stare: one part condescension, two parts disbelief. It’s the same look James gives the paperboy when the Fond du Lac Reporter misses the welcome mat on the front porch by an inch or more. I lean back into my car, pretending to check my cooler of snacks and bottled water while trying to regain my pretrip composure. As my surrogate parent for the last sixteen years, James has always been able to sneak up on me—catching me in an innocuous act like reading and still making me feel as if I’d been caught stealing from a quadriplegic. “Yes, I’m really going.”

“Does Kate know?” he snipes.

“She will,” I reply. I shut the cooler and turn to face James.

“Leigh, why do you even care? She’s such an asshole. She’s a footnote.”

“I just do, is all.” Kate is our mother, who developed the curious conviction when James and I were younger that she would one day become a great actress. The morning she left us for Hollywood, she crouched next to me and whispered absently, “Never settle. Take big risks.” Then she stepped into her Ford Pinto and lurched away from the curb, her silver bumper glinting in the sunlight, the scent of Charlie cologne mingling with exhaust in the air. I was five years old. I sat on the curb waiting for her until Sesame Street came on, after which I returned to the curb to wait for her return. Twenty-three years later, I’m still waiting.

“You’ve got to be kidding.” James walks around my car and stands directly in front of me. He looks spooky without having had his first cup of coffee, a little like a B-list actor with an emerging heroin addiction. Not that James has ever done heroin. James actually times his alcoholic beverages—one per hour—to ensure he never “loses control.” Eighty percent of my friends have had a crush on him at one point or another. Even the guys. They all want to be him, until they spend more than an hour in his presence. “When’s the last time you even talked to her?” he continues.

I ignore him and pretend to examine my kayak, which I’ve secured with bungee cords to the roof of my car. Exhaust forms a foggy pool around my ankles. I don’t think it’s a good idea to tell him Kate has no idea I’m dropping by. Or that the last time I talked to her was about seven years ago.

“And how well did that conversation go?”

His tone makes my stomach contract into a fist. “I’m in fine shape. Dr. Jensen said so last week.” I adjust my kayak one last time. Why couldn’t I have just gotten up ten minutes earlier? I suddenly hate the snooze bar. I wish I could think of something clever to say, but the best I can do is, “Besides. I’ve been reasonable my whole life. That’s the problem.” James rolls his eyes: Give me a break. Even now, he knows exactly how to make me feel like a twelve-year-old who still can’t read a clock.

“People wait for years on kidney transplant lists. . . . You’re lucky enough to get one, and all of a sudden you’re Peter Fonda in Easy Rider?” He shakes his head, almost knocking me down with a sonic boom of disappointment. I think he’s more upset by the fact that I’m growing as a person—his little sister is changing from un- assuming, vanilla Leigh, with a spine like a warm Twizzler stick, to independent, empowered LEIGH, with a firm handshake and excellent posture. I once was lost, but now am found, thanks to a kind stranger named Larry Resnick.

Makes you want to read more, doesn't it?! Well, then be the early bird and go get it!
Brought to you by As Cape Cod Turns at 9:30 PM

Sounds like a great read. Michigan is close to Wisconsin; maybe that will help me find a copy ???

Thanks Sue! Yep, glamorous Wisconsin...but I love cheese, so it really works for me.

I think I'll be getting that ASAP! Need to finish my bookclub book first though. This book will be like the award for me. :)