Patrick Swayze was an icon in my eyes. Oh, did I want to be Baby in Dirty Dancing and Demi Moore in Ghost.

The first time I saw Dirty Dancing was my Junior year in college. The freshmen I was (babysitting) an adviser for rented it and a movie room in the library. It was love at first site. Soon after, I got the flu and had to stay in the health center over Easter break. I watched DD about 4 times that weekend. Since then, I have probably watched it another 25(ok, maybe 50). I had the soundtrack, the cool white jean shorts that Baby wore and was often seen carrying around a watermelon.

Then Ghost came out. I went to the movies by myself to see it. I don't know why I was by myself, but I was and was in a crowded theater. Or I think it was crowded, I was crying so hard, I couldn't tell. I cried so hard on the way home I ran through a stop sign. Oh to be Demi and live in that cool loft and have a guy(not any guy, but Patrick Swayze) that loved you so so so much.

I love how in real life Patrick was so devoted to his wife. As we know, so many Hollywood couple's are not so in touch. As a wanna be dancer, I could only dream of marrying a guy that could dance me around the house.

I know he is in a better place now. He is no longer in pain. The images of him in his prime will forever be etched in my memory. 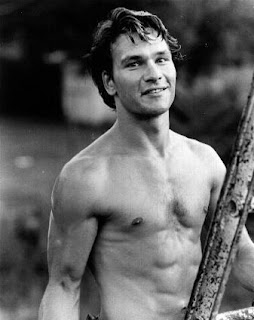 Email ThisBlogThis!Share to TwitterShare to FacebookShare to Pinterest
Labels: memories....

I am soooo sad over this, except for the fact that, you're right: he's not in pain anymore. So that's a good thing. Other than that, pure tragedy.

P.S. "...was often seen carrying around a watermelon. Hee hee!

Another icon is gone. Another link to our youth. Great post!

I wish I had a picture of her carrying around a watermelon. I'm sure I must have one somewhere!
Rest in Peace, Patrick. You certainly did bring much joy AND tears into our lives.

Nobody puts Baby in a corner. RIP Johnny Castle.

It was sad to hear of his passing, but you're right... he is no longer suffering. He knew he was loved.

I hardly ever get emotionally involved with celebrities, but the news of Patrick Swayze's death did make me sad. I knew he had cancer, a very bad form of it, but I had hoped for a miracle.
My heart breaks for his wife, who has been his constant, loving companion for years.
I'm glad he's out of pain, but his passing leaves a void.

That seemed to rush by, that life....

I held him in very high esteem, above and beyond being a cutie, because of his devotion to his wife and marriage.

Man, this does bum me out. What a guy.

I think for women, it was his devotion and love for his wife that made him even more sexy than he was. Who doesn't want to be loved like that? I hope I come close, but that is something we all aspire to. God Speed Patrick. May you finally be free from pain.

I feel exactly the same way about him. He's been the epitome of romance to me because of DD and Ghost, but also because of his obvious love for his wife.

I also loved him in To Wong Foo, Thanks for Everything, Julie Newmar. RIP, Patrick.

It makes me sad too :( I fell in love with Dirty Dancing! It was such a classic movie!

I can't remember how I found your blog now, but am so glad I did!

I was the same way about Patrick in almost ALL of his movies. What a great actor & a wonderful husband.

When I'm one day in the retirement home, I'm sure I'll be bitching for someone to turn on my Dirty Dancing DVD.

He did put up one helluva a fight...