What is wrong with me, that I cannot get my Friday Fragments out on Friday??? I think about it all week and Friday comes and whoosh it's Saturday. I think Mrs. 4444s is pretty forgiving, so hopefully she won't throw me out of the party.
*I realized that I never gave you my run down on the different ski competitions in the Olympics. Thankfully, due to weather, many of them were postponed, so I am not too late. The downhill has already happened. This is one event that I never raced, however, my brother and my dad have. Basically you point your skis downhill and go. FAST. It is the least turny of the races. SuperG is coming up today for the women. I never raced this either. It is slightly more turny than Downhill. Giant Slalom, my sister's fave, is big turns. For all these events, you have to go through a course that alternates red and blue gates. You cannot pick your own way down the hill. My favorite is Slalom, where the turns are really tight. I like turny, what can I say. I will do another post on me and skiing next week. I have to have my sister scan some pictures of me skiing.
*Julia Mancuso ROCKS the tiara! I am sure that she is Melisa with One S's favorite Olympic athlete. 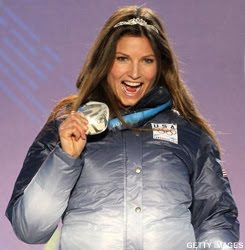 *In Maine last week, I took K and B and Beck's girls tubing. Normally, one would think, Maine in February=snow, lots of snow. Nope. It is eerily weird how Washington DC has more snow than Maine. Just look at the mud on the track! 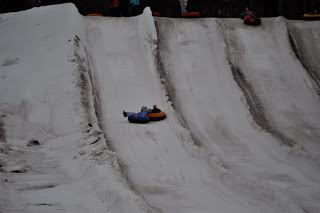 Frozen mud, didn't stop them from having fun, though!! 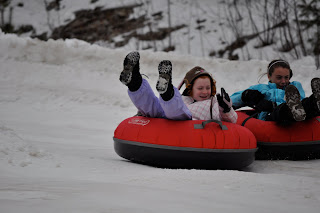 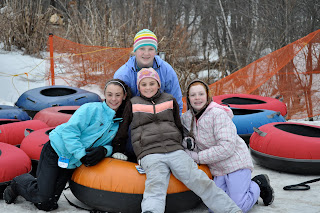 *The snow Gods blessed Maine with 3 inches of snow later that day. So the 4 girls and 1 neighbor were outside from 8-10pm having a snowball fight (complete with armor). We had to drag them inside! 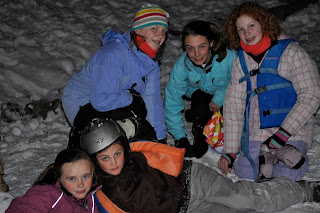 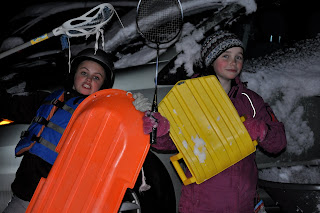 They stocked snowballs in boxes. 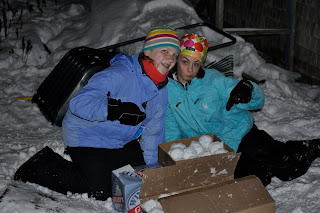 I think this is a particularly good advertisement for Long Hammer beer. 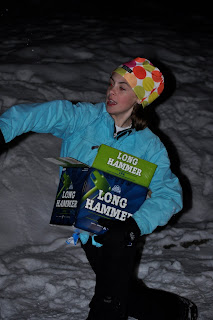 *The next door neighbor hung up his laundry early the next morning. Hey, it was going to be in the 40's. I love taking pictures of hanging laundry, but don't like wearing clothes that have been hung on a line. Weird, right? 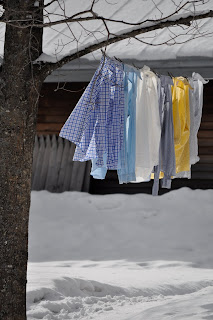 *Time to make the pancakes before the troops take my computer away.
Happy Weekend!
Brought to you by As Cape Cod Turns at 7:41 AM

Tubing looks like sooooooooooo much fun! I wanna do it!

How could you not like laundry that's been line dried? Granted, I haven't had line dried laundry since I was a kid, and back then we always had to check it for bugs and moths before putting shit on. LOL

Okay, now I really wanna see pictures of you skiing!

Love Julia M!
Those photos are great are they wearing life jackets for Armour? OMGosh too funny I love that oh and the beer photo to funny!!!!

Hope you have a wonderful weekend!

It looks like you guys had an awesome time! Such winter fun...not my cup of tea, I am truly sorry the south and midwest stole your snow. LOL

I love the tubing picture, because it looks like giant tractor tracks.

Have a great weekend!

I love the "lane dividers" in that hill! Looks really fun.

I agree on the clothes hung on the line; too crispy, haha!

No worries on the late entry :) We'll take your fragments any time (especially when they are the record-setting SIXTYth entry! Wow!)

It has been a weird winter, hasn't it? We got over 6 inches on Tuesday but it was mostly gone by Friday. Not that I am complaining.

Yes! I totally love that Julia Mancuso wore her tiara at the medal ceremony: she's awesome and I bet we would get along famously! ;)

I love the picture of the laundry hanging outside: very pretty! (If laundry could be pretty)

Growing up, my mom didn't have a dryer and would hang the laundry outside and yes, it was very pretty.

In the basement, on very cold or rainy days, not so much :(

That looks like so much fun!
Is it odd to not have that much snow in February for you?

I know, we don't have our normal snow here in NY either.

We are supposedly pretty close to our average snowfall, but you wouldn't know it.

I think we got a little bit almost everyday but some melted now & then so there's not all that much out there.

My kids used to get SOOOO mad when I hung clothes on the line. They hated stiff jeans.

I think that if you post Friday Fragments on Saturday you should subtitle them Scatterbrain Saturbits.