Friday Fragments:
Ready,
Set,
Go!!!
*We are heading to NH for the Jump Rope Regionals today! There are 16 kids on the team trying to place themselves on the team for Nationals (hello Texas in June!). It will be a very long, tense and exciting day Saturday! Good luck B!!!!
*Elevators are interesting things. I was standing at one in Boston last weekend waiting for it to magically appear, open it's doors and whisk me up to my floor. Clearly I was standing there waiting for it. A man comes up, slams the up button like 5 times and waits with me. Seriously, do elevators come faster or blow off other floors when an impatient person pushes it's button repeatedly?
*I don't think I was allowed to take pictures in the Gardner Museum because 20 or so years ago there was a big robbery and some very very very expensive art was stolen and is still missing. So we happened to be going through the rooms at the same speed as Joe Peschi (no not really him, just looked like him) and a very large man with shorts on that were too big and big clunky sneakers. At every room they asked the guard about the heist, whether it was an inside job, whether the person had worked there then, which items were stolen... It was a little like they were casing the joint. So, if there is indeed another heist there, I will be calling the tip line and receiving a big reward.
*People watching in Boston is fun. At the MFA, there was an adorable elderly couple sitting next to us in the (overpriced) cafe. They shared soup, had a soda and some conversation. The man had a Texas tie thing on over his sweater. The cutest thing was that he had a hot pink collared shirt on under the sweater and hot pink socks on. Now did he dress himself, or did his wife pick this out for him?
(warning, bad cell phone picture. Was I being discrete or what?) 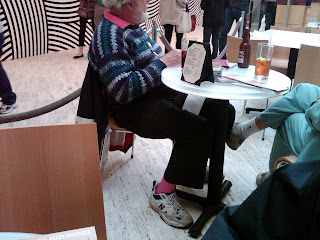 *We ate one night at a restaurant called Fire and Ice. It was like no other eating experience I have had before! We just don't have rest. like this on Cape Cod. It's like I live in the boonies or something. You got to pick your vegies and meats, then stand around a big circular grill while about 6 men worked around the grill turning the food. One guy was definitely the expert because he was able to keep track of 20 dinners while watching the Red Sox game over the bar. Another guy was definitely the newbie. He didn't quite have the hang of having spatulas for hands. The dinner was delicious!
(yeah, another bad cell phone picture. I was just giddy with excitement over this grill thing!) 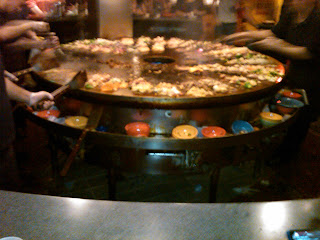 *Have a nice springy weekend!
Brought to you by As Cape Cod Turns at 5:32 AM

Men, elderly or toddlers, should not wear pink... ever.

I miss you too. I will be back in Blog World soon, I promise. There have been some pretty big changes in my life, and I can use some suppport. I'm determined to get back to my cyberfriends as soon as possible!

I used my cell to take a "discrete" picture, too, this week and then realized the kid was actually posing for me. I just walked away.

They have jump rope competitions??? AWESOME!!!!
I bet those are so fun to watch!!

Love the snap of the camera phone! (What did we do before to capture moments like this?) - you should have leaned over & told the guy - REAL MEN WEAR PINK! :)

Elevators sure are interesting. There's a whole etiquette to them: look straight ahead, not at the others riding with you. You should always ask "What floor?" to new people coming on. Definitely don't eat gassy foods the day before getting onto an elevator.

I try to avoid them. I watched Die Hard one too many times, got stuck in one once, and just don't trust them.

WOW hoping for a great jump rope contest for B!!!!

I am gigglin over the pink shirt and socks the sweater with a tie and your discreetness...I know you did it all for us... =)

I love it when men wear pink! I'm serious here. It makes me giddy with delight because they look great in it and most men won't wear pink.

The pushing of the elevator button repeatedly drives me bonkers.

Love the frags! Good luck to the kids in the jump rope tourney. I can't wait to see a post about that trip. ;)

Boston looks like so much fun! It's on my list of "Cities to visit!" My stepsister lived there for a short while before heading back to Manhattan where she lives now. She really loved it! Glad you got to get away-- You deserve it!

YUM I love fire & ice - I wish they had one down here in Atlanta - might have to make a stop there this summer when I am in Massachusetts!

I always seem to miss my shot when I'm trying to be discrete taking pics.

I'm looking to get to Boston soon- never been!