It's not every day you get a package in the mail and when you do, it's usually worthy of a celebration! I always feel like high-fiving, Bob, my post office manager when I get a package. I don't think I could ever work at a post office because I would want the people to open their packages right up so I could see what they got. Hmmm, nosy much?

Anyhoo, I got a package from Melisa the other day. I knew she was sending Flat Sue home, but was not expecting to find Flat Sue in a good sized box. Among some trial sized items, there was a jewelry organizer, a bandanna, a pen, some paper AND

B was the first one to yank the uterus out of the box (future gynecologist?) because she thought it was a stuffed animal. Haha, the joke was on her. I had heard rumors from Blogher about uterus' being given out so I immediately knew what it was. She dropped it like it was on fire when I told her. I, however,  was pretty happy about it. Flat Sue had someone to share the trip home with from Chicago and I, after 7+ years, have a uterus again! 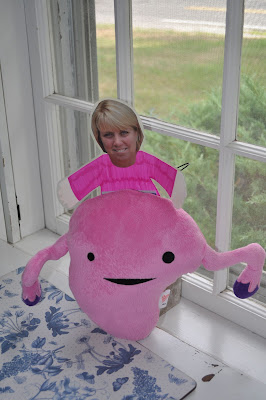 If you want to learn about the company handing out the uterus', please go here.
Brought to you by As Cape Cod Turns at 3:07 PM

Flat Sue is probably wishing she was still lost.

OMG! What if you opened that in front of Bob? Would love to have heard that explanation! That is just the funniest thing and in case you didn't know it - your friends are CRAZY but loveable! I'm still giggling! Nana

I'm going to have to talk to Nana.

Oh never mind. I reread the post. BOB THE POSTMAN. GOT IT. :)

Omg that's so cute! I heard about this company. I hear they have ovaries plush dolls too. I want one of those! Lol

My, what big uterus you have there!

Melisa guarded Flat Sue like it's her newborn. I rode with Flat Sue on the plane, even held her hand so Melisa can take pics, and even laughed along the many adventures Melisa took her to. lol

And it's pink, go figure.