When my oldest/dearest friend, Melissa, and I were younger, we loved making up stories of things and people. She just treated me to the trip of a lifetime in Aruba last week. This picture is a picture of the cabana next to ours that I secretly took. The following is the story that I feel goes with the picture.... 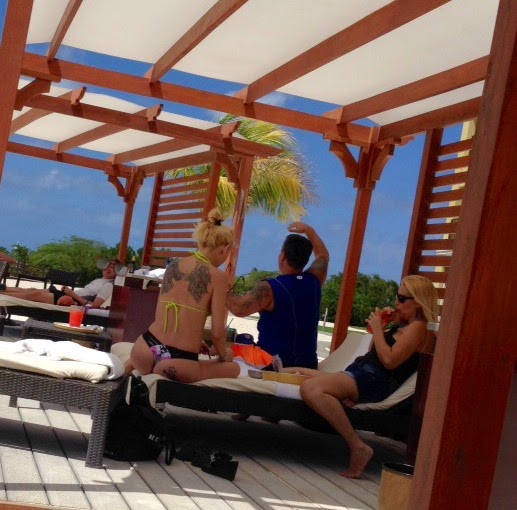 Jimmy Valero had lived on the south side of Philly for all of his 46 years. he knew the neighborhoods, the people, the way things worked. Actually; he was in charge of how things worked in the underground. Jimmy liked the finer things in life: Cuban cigars, fast cars and hot Brazilians. As he got older, he put more of the day to day workings of his business on his nephews' shoulders. He told people that he dabbled in real estate, but that was the front for the drug running business he had. Sure he had sold a few houses in his day, but that didn't make nearly the money of drug running. He loved to run the drugs, but he had never taken any himself. He had watched too many addicts die while waiting for their next high to want to get involved.

His favorite place to blow off some steam was Aruba. He went twice a month and bought a time share at 2 different hotels. The cigars were cheap and so were the women. Jimmy oozed sex appeal with his greased back hair, gold charms and chest hair. He walked and talked like he had money and was happy to flaunt it. At the roulette table one recent night, he met 2 Brazilian strippers who were sisters. They barely spoke English, but with the size of the breasts and asses, Jimmy could have cared less. They spent the night all together at Jimmy's time share at PlayaLinda. Sleeping was not much for the activity in which they were involved. The next day Jimmy invited them to his beach cabana.

The girls had bikinis that were more akin to thong underwear showcased at Victoria Secret. As a matter of fact one of the girls had angel wings tattooed on her back and a devil on her right cheek. While the girls traded off laying next to Jimmy on the chaise, they would chat with their cabana neighbors. Jimmy loved telling people about his backyard in Philly. He had transformed it into his own mini Aruba. He had spent years searching online for items that would fit perfectly in his special space. he even had fake palm trees that looked so real people wondered how he grew them in city soil.

The girls decided to go swimming to cool off from the high temps in the cabana. Their asses shook as they playfully blew Jimmy kisses as they walked toward the water. An hour later they returned completely dry, giggling and rocked out of their minds.

Jimmy and his girls went back to the hotel for an afternoon "siesta". They never came back. Jimmy was found the next day tied to his bed in his time share with no money in his wallet and no pulse. Jimmy had had a heart attack while being pleasured by his Brazilian call girls. they took all his winnings from the night before and fled as quick as they could. Instead of a burial in South Philly, Jimmy had wished to be thrown off the North side of the island.

Jimmy Valero got his wish.
Brought to you by As Cape Cod Turns at 9:03 PM

Email ThisBlogThis!Share to TwitterShare to FacebookShare to Pinterest
Labels: Aruba, not true, story