A Blond Walks Into a Firestation...

The blond theme is running rampant around here.... This story is not about me. It is about someone near and dear to my heart, but I will not out-her publicly. Let's call her Elizabeth...

Saturday night, Elizabeth woke up feeling dizzy. Elizabeth is prone to panic/anxiety attacks and had pretty much determined that she had a concussion and a number of deadly diseases which were causing the dizziness. Her husband eventually calmed her down enough to go back to sleep.

Sunday morning they woke up and she was still dizzy. Husband said, "I will take you to the emergency room", while Elizabeth said, "How about we just go to the fire station?".

This is an approximation of the phone call....

Fire station: Hello.
Elizabeth: Hi, um, I woke up feeling dizzy and was thinking I could possibly have a concussion and maybe could I come in and get looked at?
F.S.: We can come to you if that would be better.
Eliz: No, the baby needs a nap, so my husband can drive me and baby can sleep in the car.
FS: OKkkkkk
Eliz: I have a weird question for you though... is a certain fire fighter working?
FS: She's still in the building, but off duty.
Eliz: OK, that is good. She doesn't like me. We are neighbors and we have dog issues.
FS: Okay......Totally understand. Come on in.

Elizabeth, baby and husband go to FS. Husband drops off Elizabeth so he can drive around while baby sleeps.

FS(a little bit concerned): Did you husband just drop you off and leave?
Eliz: Yes, baby is sleeping in the back seat.
FS: So why don't you tell us what is going on.
Eliz: Well, yesterday was the Women of Fishing Families' Celebration at the Fish Pier and I hit my head while wearing a sumo wrestling blow up suit. 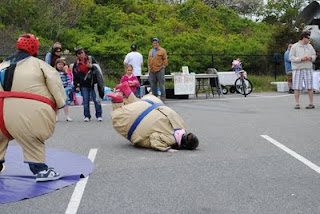 FS: Oooh, those suits are so cool!
Eliz: Yes, and there might have been some alcohol involved.
FS (smiling): Yeah, we kinda figured that. Did you pass out, see stars, etc...
Eliz: No, I didn't pass out. I also consumed 2 red bulls. And I am prone to anxiety.

Fire Station checks out Elizabeth and tells her to take it easy, but they don't think she has a concussion. She leaves the building and realizes that dear husband is not outside. She goes back into the fire station.

Eliz: Um, yeah. While all that was going on yesterday... I lost my phone. Could I use yours to call my husband to tell him I am all checked out?

Calls husband who says he is just about there, but really a mile away. She goes back outside to wait  until he gets there. Even though it is raining she stays outside because she can not embarrass herself further by walking back into Fire Station.

Today, she posts this on facebook: It's a Christmas Miracle - the cell phone has been found! Where it was found is too crazy to even admit but lets just say it was safe in a flower window box with a beautiful view of the ocean.

PS: That is her friend falling in the photo. I am not sure anyone got a shot of her fall.
Brought to you by As Cape Cod Turns at 8:53 AM

Um, I have no idea who you are talking about ; )

Thanks for the smile : )

There may not be photographic evidence of the fall, but there IS video evidence! ;)

This picture is classic. Face plant with pink boots up in the air!