Things are quiet on the Cape in the winter. Many, many of the cute little downtown shops close their doors for the long winter months of January, February and March. Some close up shop from Columbus Day weekend to Memorial Day weekend.

However, there are some hardy folks whom we are grateful for because they keep their shops open all year long.

Yesterday was the beginning of a new era for shopping in town. BJ one of the owners of  Millie's General Store (featuring all American made products) came up with the idea for a cash mob. We all know what a flash mob is (and with any luck I will participate in one someday), there was even one on Modern Family. BJ's idea brought 17 brave pioneers to the elementary school parking lot yesterday afternoon at 3:30, none of us knew where we were going. We were told to bring $20 and the theory was to all walk into one store and spend at least $20. What a boon that is in the middle of winter for a store owner to make an extra $300.

The store of the day was Cape Fisherman's Supply. Cape Fish is a year round store that has been in town for a long, long time. They service all the commercial fishermen in town and in the summer serve the sporting fisherman, too. Well, 17 women were a little skeptical about going to Cape Fish and what we would find for $20. The new owner of Cape Fish was pleasantly surprised when we all busted into his store. There was laughter, chatter and many questions of "what is this?". Everyone walked away with something. People bought belts with fish on them, t-shirts, cleaning supplies and knives. Afterward some of the women went to The Red Nun (a local year round watering hole) and were treated to wings!

This is a fantastic idea that has bonded one little town and will hopefully grow to other towns in areas where winter is just a little too long. I anticipate next month's secret adventure to double in size and enthusiasm! 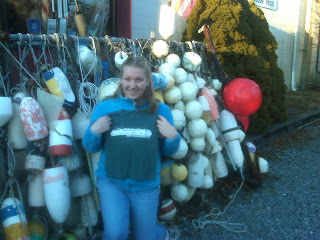 This is B holding up one of our purchases in front of the store. Not a t-shirt for her, but for the little bundle of boy joy that will be born into the family in June!
Brought to you by As Cape Cod Turns at 10:05 AM

This was such a fun thing to do! The Cape Fish men got right into the fun of it also. You can buy great knives there that don't cost nearly as much as they would in Macy's, Kohls, or Target. If you live in this area take a trip into Cape Fish (Depot Rd) and see what you can find. Can't wait for next month! Nana

How exciting this was for the gracious people at Cape Fisherman's Supply to have us barge in on them on a slow Wednesday afternoon; but what we walked away with was so much more. How rewarding it is to help our local merchants during the off-season. I am looking forward to next Months which will happen before Valentine's Day. So spread the word and stay tuned! B.J. Hansen

Such a great idea and honestly who doesn't have an extra 20 to spend and make a difference in the local shops! Way to go!

what a COOL idea! i can't wait to find out where you go next month & what you get!

Fantastic!!! Wish I had been there for all the fishiness but I will be waving my $20 next month! Can't wait!!