Statues were a big source of amusement for us and thankfully, Paris had one around every block. I have many a picture of naked male statues, but I will only grace you with the 3 funniest statue "situations". 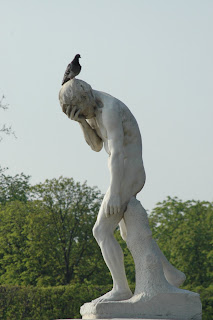 Then at the Rodin museum, we saw them taking away some statues that had seen their
time. Were they going to statue heaven? I don't know, but they seemed pretty tied up about it. 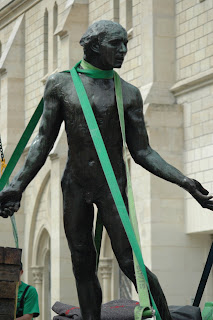 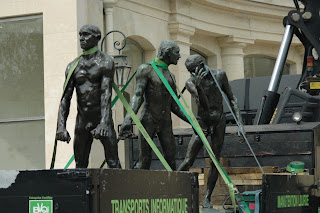 Then, there was the French man standing next to a little pond where kids were floating boats. He's got his requisite scarf on (it was about 75 degrees) and he's holding a balloon for his kid (I hope). 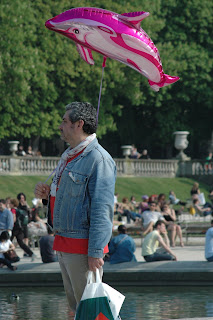 One day we went to the BEST ICE-CREAM place in all of Paris according to guide books and actual people. Who knew we were only to get a teaspoon full on top of a regular cone? I am actually holding mine and my mom's in this picture, but if she had turned around, I probably would have scoffed hers down as well. 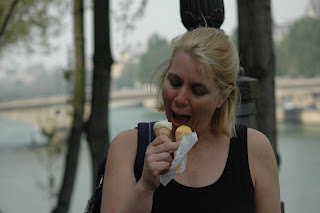 My mom and I have the same (twisted, warped) sense of humor. At many of the parks in Paris, you are not allowed to sit on the grass! Yes, unbelievable. So, we are at these ponds and the park is packed. There are chairs around, but you have to search for them and grab them when you can. I (swear) I was searching for 2 chairs for us, but my mom found her own, which I found hysterical. Could have been the beers we sucked back at a cafe, who knows? 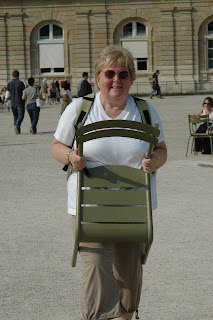 We think we are the funniest people we know. That's probably why we made such good traveling partners. Tomorrow, I will try to show the more beautiful pictures.

Email ThisBlogThis!Share to TwitterShare to FacebookShare to Pinterest
Labels: Paris 07

Oooo..... I see the picture I like. the one with the ice creams. So what flavors did you guys have? Can you remember? And were they as good as people said?

Also, did I e-mail you about watermarking your photos? Someone tried to copy mine..... again. And you have really nice ones. So you might want to watermark them as well. You can try the site
picnik.com. It's free! Always a good thing in my book. :) E-mail me if you want details.

We are a funny team and had many good laughs. I loved the statue with the bird on his head. Lots of birds in Paris!

These pictures are enough to get my travel bug. Funny pictures.