Seals, Sharks and a Bear

There's a bear under there.

Haha, made you say underwear!

Have you heard the news? Yes, there is a bear on Cape Cod. Now, that is no easy feat since Cape Cod is essentially an island. Many moons ago, someone smartened up and decided that it was way too far to sail their boat around Cape Cod and that there should be a canal of sorts to cut off some traveling time. A canal was built and then 3 bridges; one for trains and the other 2 for cars. 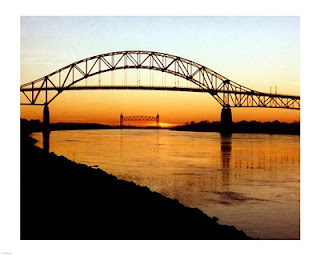 Thank you Wikipedia for the photo

These bridges can cause many a traffic problem and often leave people in longs lines trying to get "onto" the Cape on a Friday evening and "off of" the Cape on a Sunday afternoon. I feel lucky to live here just so I don't have to sit in that traffic.

Anyhoo, there is much debate on how a BEAR got onto Cape Cod since we just don't have any bears. We have raccoons, deer, coyotes, lots and lots of bunnies, seals and even possums, but no bears. Some say the bear swam across the canal. The canal is 540 feet long. Some say he walked across one of the bridges. Some are guessing that he hopped a trash train to the Cape. This is big news down here. Everybody is talking about it and it only became news yesterday.

I left a bag of trash out on my patio all day hoping to catch a glimpse of the big furry thing, but no luck. And before all you bear loving radicals come after me for teasing a bear, I happen to know as of this morning it was about 25-30 miles away from my house. I didn't think it was going to high tail it to my door. I was just hoping to shoot it. WITH MY CAMERA SILLY! Wouldn't that have been cool if I had a picture of a real live bear hanging out in my yard. Well, maybe a little frightening, but I don't foresee myself trekking through miles and miles of forest  to see one.*

The Cape Cod Beer company has already made a shirt just for this news. You can pre-order them here. 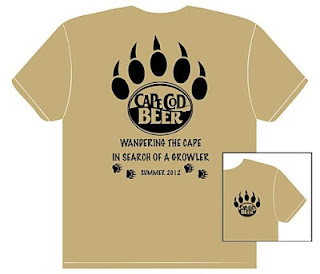 Evidently a "growler" is what they call the biggest jug of beer that they sell. Fantastic, right? They are capitalizing on the bear faster than Chatham capitalized on the sharks.

Hmmm, how much do you want to bet our bear friend is going to hop a ferry and head to Nantucket next?

No bears were harmed in the writing of this post.

*Camping? So not my thing!! Unless we are talking about a 5 star hotel.

Email ThisBlogThis!Share to TwitterShare to FacebookShare to Pinterest
Labels: bear on the loose, cape cod canal

O M G ! I hope he is still ok. I wonder if he is waiting for us. If CC Times had not started trying to charge people to visit their site, I might hove known about it. :)

Okay, that's just creepy. How the heck DID it get there and, more importantly, maybe I should come up there and help you catch a pic of it for the greater good!

I'm guessing he hopped the trash train. And I LOVE the way that you Cape Cod-ians (Cape Coddites?) seize marketing opportunities. Be careful out there!

That's funny in a 'I hope no one gets hurt' sorta way. I'm still surprised when we get bear sightings here in Florida too.

Well HELLO Scargosun!!
You can go here http://www.capecodtoday.com/ to get free cape cod news. I am annoyed that you have to pay for the times news too :)

I love how you left out garbage for him. LOL! You crack me up! Be safe! I like to think he swam there...its been pretty hot these days he needed to get away ;)

Since I LOVE bears (from inside my car and at a safe distance) I find this a very fun story.

We always vacation in the northwoods of Wisconsin and I keep my eyes peeled the WHOLE TIME trying to spot a bear.

One year, like the DAY AFTER WE LEFT, a small mama bear wandered into the liquor department of the very grocery store where we shop!!! (I guess she was looking for a "growler!")

The next year that store was rife with small stuffed bears wearing t-shirts that said "The Bear Shops Here."