I tried, I really tried.

My girls saw the casting call on tv a few weeks ago for Bernie and Phyl's furniture store. It said, be there between 10 and 2 at their Braintree, MA store and the first 75 kids/groups of kids would be chosen. "Can we Mommy?" they begged with those big idyllic smiles on their faces. "Sure, no problem" I said wanting to please them and help them toward their ultimate goal of being 'famous'.

OK, so the alarm went off at 6:45 Saturday morning. We got up, showered and jumped in the car. Knowing that it would be 1 1/2 hours to get there and thinking we should probably be there an hour early (just in case) we flew up the highway. I mean I drove 55mph like I should have with my hands at 10 and 2. Stopped long enough at the drive thru at Burger King to grab some french toast sticks. (Not so tasty) Drove through a down pour until we were 20 minutes from our goal....then it started to snow. Why I hadn't listened closely to the forecast was beyond me. The girls were in cute matching black capris and purple fleece sweatshirts. Capris are not a good call in snowstorm. Especially when one is wearing furry crocs with them.

Hmmm, was it the sea of umbrellas I noticed first or the lack of parking situation? Being a well organized, I mean prepared, I mean just basically unorganized mom that I am, I luckily had plenty of hats, mittens and scarves in the car. I even found a fleece blanket in the trunk and an umbrella. We made our way into the line. First I thought maybe the store didn't open until 10 and then they would let us in. Wrong. They were taking a kid every 4 minutes from the blizzard that was ensuing outside. I am not a very good estimator, but looking at the sea of umbrellas ahead of me and doing the 4 minute calculation and the fact that they were taking the first 75, I thought,"We don't have a chance in hell at making this audition." 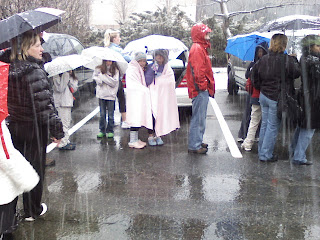 I did not utter this aloud, but stood there patiently holding the umbrella over my 2 chilled kiddies. After about 1/2 hour and before the frostbite started in earnest, the girls decided that this was ridiculous and that we should bail out. I had to agree, we were about # 150 in line. 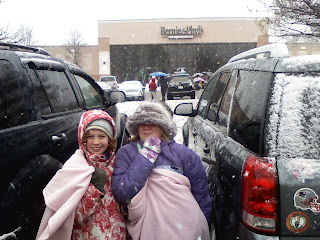 Surprisingly enough there were no tears. Maybe because their tear ducts had frozen. I felt really bad because they had practiced this great routine all week long with the B&P jingle and they were beyond psyched to be on tv! What's a mom to do in a situation like this, but take them to the nearest mall for some shop-therapy. We were even at the Mall before the Easter Bunny woke up, so we stole his seat for a photo-op. 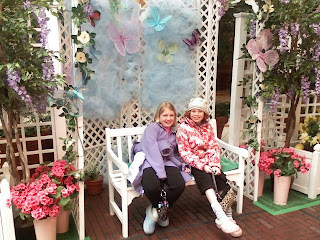 Build a Bear Workshop was the first stop, where they got a bunny and chick. Macy's for spring outfits, naturally. Enough with the stupid snow. K picked this outfit out herself. Honestly, not many people could pull this outfit off, but she looked great. And she loved it and she wants to wear it to school tomorrow in 35 degree weather. Maybe next week, honey, when it is officially spring. 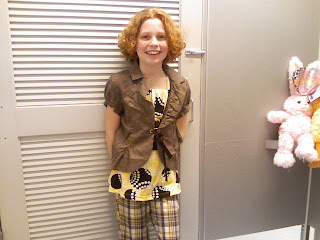 Then we made our way to Target and wandered around for an hour. Boy, do I love Target. We got home at 4:30. It was a long, and at times disappointing day, but us girls have to stick together and find fun wherever we can and that's what we did! Bernie and Phyl don't know what they missed!
Brought to you by As Cape Cod Turns at 10:09 PM

She looks darling in that outfit!

That's too bad about the commercial. I'm surprised that the weather didn't scare people off!

Thanks for stopping by the other night!

K looks like she will be in the field of fashion and design. Wish I had girls so that I could do fun girl stuff (i.e. shopping, standing out in bad weather to try to be famous). Right now my 3-year old knows that fun stuff comes in Target bags, but he's not always keen on going to the store unless he can get candy or toys while there.

I know how you feel, I took my kid to that same audition. We might even be in that picture! Well anyways, we waited without any preparation and became chilled to the bone but my 11-year-old is very determined so we waited. We never got to audition, but they gave us a callback.