I have always loved Valentine's Day. Maybe it's the romance of the whole day, maybe that it has to do with chocolate and flowers, maybe because it is a chance to tell everyone how much I like them and appreciate them. I got engaged on Val. day 15 years ago. Don't ewww and ahhh, it was not very romantic. He had had the ring since Christmas and was making excuses to put off asking me. He tried to put off giving me "this present" until my birthday(next month), but I became a little pouty and demanded "this present" NOW. So he tossed me the box and said, "Will you?". That was the beginning of this beautiful fairy tale that currently includes 2 fabulous girls, a dog, a goat, 7 horses, 5 bunnies and lots of fish.

Since K was a baby, I started taking Valentine pictures. Then B came along and I still take V pictures. Even though I send out Christmas cards, I like to send out an email Valentine card. February is a lot less stressful than December around here, so we get V day tshirts and have a photo shoot. So far, they still think this is fun. I found some old ones to share with you and today's. 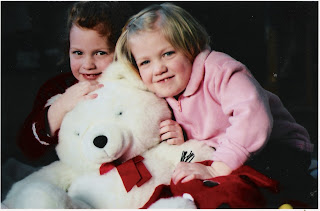 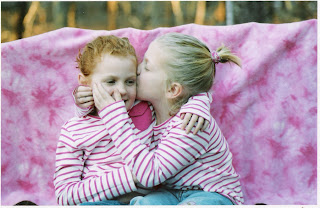 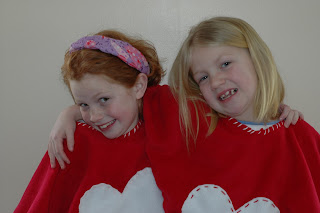 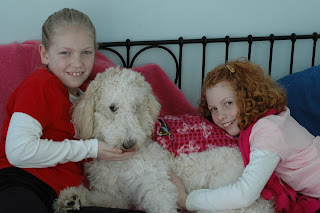 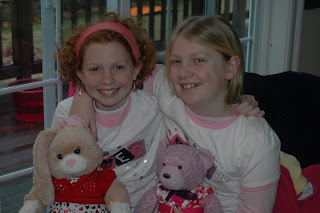 Before I have had too much champagne, it's time to get dinner on the table. Hope someone told you how much you mean to them today. I think you are great!
Brought to you by As Cape Cod Turns at 6:31 PM

I came over from Jules.

I've yet to figure out how to get the readership of Manic and I've been blogging for a few years now.

Your girls are so cute. I like your dog too, I had a big stuffed one like that. My dad gave it to me when I was 9 or 10.