I blew my own streak. I wanted to post every day in March and my damn friends took me out to dinner Friday night, allowed my to drink too much and stayed at my house until 11:30 at which point I crawled up to bed. Can one have better friends?

Let me back up to say that Friday morning, I was on my way to Sturbridge Village (2 1/2 hours away) following a bus full of 5th graders with my sister in law(sil). My sil had her son's cell phone. He forgot to take it on the bus with him. A 1/2 hour or so into the trip, his cell phone gets a text message. Of course, she looks at it and reads it. That's when we became 11 again. She starts answering the text messages like she is him. Then I have to say, "Ask her if she likes, so and so", so she does and gets the answer "No WAy!" We amuse ourselves for 1 HOUR unbeknownst to the girls that it was not C they are talking to, but his mom and aunt! We cracked ourselves up. C was not too happy when we told him what we had been up to, but he forgave us. (Phew)

It rained most of the way there and all morning long. S.V. is mostly outside. The rain didn't seem to bother the oxen, the roosters, the lambs, the people who work there or especially the kids. 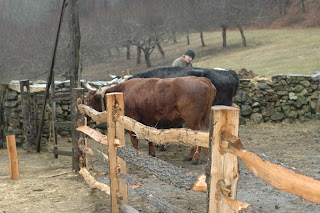 I guess it didn't bother me too much either although I was asked what I was harboring under my jacket a few times due to my camera that stayed warmer and drier than I did. 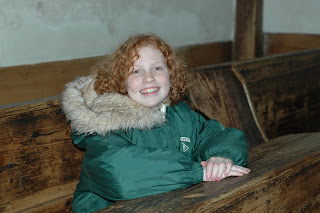 K at the old school house.

The car ride back was less eventful probably because we had rescued K and C from the bus and took them home with us. The ride started off fine, SIL slept, K and C played magnetic checkers, I daydreamed about a beach in Aruba, I mean I paid very close attention to the road. With 1/2 hour left, all talk turned to poop. Kids think poop is hysterical. C had to go, but didn't want to make me stop until it was almost too late! We pulled off the highway and drove to a nice hotel where he relieved himself, jumped into the car and said, "Quick, we have to leave, I just dropped a foot long in there and the place will never be the same!" K and C laughed about this the whole way home.

I thought I could write yesterday, but wound up cleaning the house in the AM for the ant exterminator. Yes, I am sure he appreciated my clean counters. The big carpenter ants appreciated my clean hallways. I don't think they appreciated the poisonous spray into their nests. My mom, dad and brother decided that Sat. afternoon would be a fabulous time to go to IKEA. All 3 were not comfortable in the front of my bro's truck, so my mom was going to drive herself. Being the oldest kid, makes you the most responsible kid. (Funny, I can be 41 and still a kid!) My mom has had trouble with her sciatica and I didn't want her driving that far herself, so B and I went with her. We arrived at IKEA at 2:30 on Sat. afternoon. Not a time I would recommend to anyone. The entire United Nations was there. Didn't stop me from getting a bunch of stuff, though. My (anal) brother measured this and that (everything), used the calculator and went through a few pencils figuring out what was needed for parent's new house. We got home at 8:15!

Guess what we all will be doing today? You guessed it, putting together $500 worth of IKEA furniture. Better go get some batteries for my electric screwdriver since it's too chilly to go streaking.
Brought to you by As Cape Cod Turns at 10:50 PM

OK--you kill me! First, the texting like teens. Did he ever find out!!! Oh, and dropping the foot long . . . hilarious!

IKEA hates screwdrivers. It's why they provide their handy Allen wrench. The one that will eat a whole in the palm of your hand. The one you will throw away when you're done. And the one that you will need a few months from now when things need tightening. Remind me again why I LOVE IKEA?

I see you around on other blogs I read - just wanted to say hi. I share your coast, as well.
This was a funny post.
Oh, I secretly like HS musical music, too. (I guess it's a not so secret secret anymore.) Also love Better off Dead (the movie).
Anyway, have a grand Monday. I'll try to remember I said hello and come back again.

Tootsie, You are so right,no screwdrivers. I forgot about those fun little (not) allen wrenches.

Karla with a K, Thanks for stopping by! Congrats on winning on Manic's site!

Oh and Laski....IKEA is 1 1/2 hours away and the nearest Target is an hour. I would probably be living in a box on the street if they were any closer!

OMG! I would have done the SAME thing. HILARIOUS!

We are only about 45 mins from Sturbridge Village. I hope to take the kids there this summer. It is awesome!!

Haven't gotten bit by the IKEA bug yet.

I grew up in the town where IKEA is... ugh. lol Hubby saved me by moving to the Cape (he's the native, I'm the washashore).

PS - we had a similar situation on a bus ride home from a field trip to the MFA in Boston. Except one of the TEACHERS got ahold of the phone (actually it was a Nintendo DS which you can chat on)! We all roared laughing!